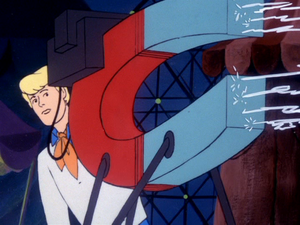 An electromagnet is a type of magnet in which the magnetic field is produced is produced by an electric field.

It can attract metal, and is strong enough to pull in a lifesize robot.

When Mr. Jenkins revealed that the out of control robot belonged to him, he teamed up with Mystery Inc. to capture with his large electromagnet. They mounted it on top of Mr. Jenkins's Jeep, and followed Charlie's signal with Mr. Jenkins's special metal detector. Once in range, the magnet was activated and started to pull Charlie to it. But Mr. Jenkins's sister, Sarah, prevented Charlie's capture by cutting a wire on the device. It was already too late, though, as the robot's circuits had been fried by the current, ending its mayhem and rampage over Funland.[1]

Retrieved from "https://scoobydoo.fandom.com/wiki/Electromagnet?oldid=187148"
Community content is available under CC-BY-SA unless otherwise noted.