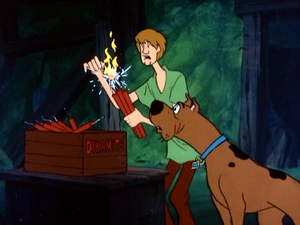 Dynamite is a high explosive.

It's typically shaped like a long, red, thin cylindrical stick.

Shaggy Rogers found some at the beginning of the gang's time in Gold City Mine, and lit some, thinking they were candles. After Velma Dinkley warned him of his mistake, he tried blowing them out, before throwing them far off into the mine before they exploded. After the explosion, Shaggy and Scooby-Doo shushed at each as they didn't want to alert the Miner Forty-Niner of their presence.[1]

The Snow Ghost tried to blow Velma and Scooby with it.[2]

Dynamite was used to help Professor Jefferies mine rare crystals in the Himalayas. Also, Shaggy and Scooby accidentally light some of it thinking they were candles.[3]

It is used to destroy the dam, draining Big Moose Lake, flooding Camp Little Moose and revealing the once underwater town of Moose Creek.

Retrieved from "https://scoobydoo.fandom.com/wiki/Dynamite?oldid=352333"
Community content is available under CC-BY-SA unless otherwise noted.