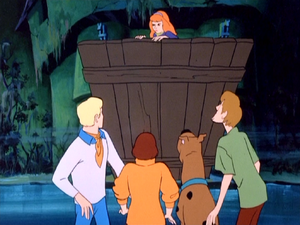 A drawbridge is a type of movable bridge typically associated with the entrance of a castle surrounded by a moat.

A drawbridge is made of natural, exposed wood with steel chains attached to the deck. The chains connect to a large pulley system that is used to raise and lower the deck, either by a hand crank or by an electric motor.

After the gang arrived at Franken Castle, they were crossing the drawbridge when Dracula appeared to tell them not to enter the castle. He then transformed into a bat and flew away as the drawbridge began to raise. While most of the gang were able to get back to safety, Daphne was unable to make it across and became trapped in the castle. In order to investigate and stage a rescue, Fred lassoed one of the Gargoyles so that Shaggy and Scooby could wing across the moat and lower the drawbridge.[1]

Scooby-Doo and the Ghoul School

Retrieved from "https://scoobydoo.fandom.com/wiki/Drawbridge?oldid=362276"
Community content is available under CC-BY-SA unless otherwise noted.