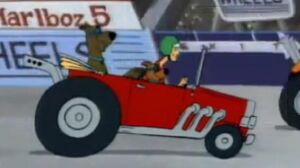 The Double-Dyno Turbo Blaster was a red race car once owned by Shaggy Rogers. The race car was primarily used during the events of Shaggy's brief time as Dracula's replacement werewolf.

The unique race car has numerous abilities such as:

Shaggy originally used it at the Tyler County race competition, carrying along Scooby-Doo and Scrappy-Doo as mechanics.

The second time, it is used more casually, being Shaggy and the Doos' mode of transport to the grocery store.

The third time it took Shaggy, his girlfriend Googie, and the Doos to a drive-in movie. After Shaggy was turn into a werewolf, he used the car to get away from the mob trying to attack him. Unfortunately, they were captured by the Hunch Bunch and were taken to Castle Dracula. They compromised with Dracula to test drive it in the race while the Werewolf Wagon was getting some "modifications" by the Hunch Bunch. Googie and Scrappy used the car to check out any traps ahead of the Werewolf Wagon throughout the race.

They saved Shaggy and Scooby three times: once from falling off a cliff, another from the Shockless Monster in the tar pits, and once more by arriving with a spare engine. They, along with Shaggy and Scooby, fled from Dracula's clutches and made it safely back home.

Retrieved from "https://scoobydoo.fandom.com/wiki/Double-Dyno_Turbo_Blaster?oldid=320780"
Community content is available under CC-BY-SA unless otherwise noted.