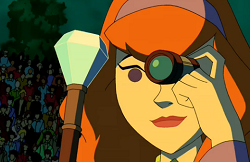 The diamond was supposedly stolen by Theodore Avocados a long time ago.[1]

Theodore Avocados did steal it, and concealed it as a door-knob,[1] which ended up at the Burlington Library.[2]

It was the object of a treasure search by Rung Ladderton, leading him to steal all the crystal door-knobs in Crystal Cove and transport them to his hiding place with the Ghost Truck.[1]

It was sent as part of a shipment of items from the Burlington Library to lend authenticity to the production of The Donkey That Saved Crystal Cove. It was used by Daphne Blake to decorate a staff carried by Shaggy Rogers, playing Friar Gabriello Serra. George Avocados, son of the original thief, dressed up as the Mummy of Friar Serra to try to steal it.[2]

Retrieved from "https://scoobydoo.fandom.com/wiki/Diamond_stolen_by_Theodore_Avocados?oldid=305337"
Community content is available under CC-BY-SA unless otherwise noted.