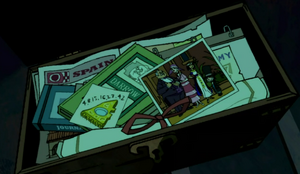 The Darrow Family Archives is a box of documents and pictures showing the history of Crystal Cove, with records relating to the Darrows. It was stored at Darrow University until Mr. E stole it and gave it to the gang. Along with it he left a note: "If the first Mystery Inc. had what's in this trunk, maybe they never would've vanished in the first place."[1]

Mr. E put it in the Mystery Machine for the gang.[1]

Daphne Blake was sitting on it, talking to Fred Jones, Jr. about their engagement. Later, the gang took the trunk to Darrow University so Professor H.P. Hatecraft could help decipher the papers in it.[2]

Retrieved from "https://scoobydoo.fandom.com/wiki/Darrow_Family_Archives?oldid=303579"
Community content is available under CC-BY-SA unless otherwise noted.