Scoobypedia
Register
Don't have an account?
Sign In
Advertisement
in: Actors within the Scooby-Doo universe, Babysitters, Blakes,
and 13 more

For a full list of what Daphne wears, see Daphne's outfits and disguises

Daphne is a teenage female, with an hourglass figure and shoulder-length red hair. Her most worn outfit consists of a purple top, dress, pink pantyhose, and purple shoes. She also wears a plastic purple headband and a green scarf.

At the time Shaggy Rogers and Scooby-Doo moved into Shaggleford Manor, her outfit consisted of a purple long-sleeved dress with a light purple border, pink stockings, and purple boots. She continued to wear the headband.

Despite her family's extravagantly rich background, she chooses to live independent of that wealth in her adolescence, having the same money problems as the rest of the gang.

Daphne was voiced in the first season (1969-70) of Scooby-Doo, Where Are You! by Stefanianna Christopherson. When Christopherson married in 1970, Heather North assumed her role. North continued to voice Daphne until 1980, when Daphne was dropped from the series. Daphne returned to Scooby-Doo with The All-New Scooby and Happy-Puppy Hour Show in 1983, and North resumed her role as voice actress until Scooby-Doo was cancelled in 1986. North reprised her role as Daphne in 1997's Johnny Bravo-Scooby-Doo crossover episode, and the 2003 direct-to-video films Scooby-Doo! and the Legend of the Vampire and Scooby-Doo! and the Monster of Mexico. 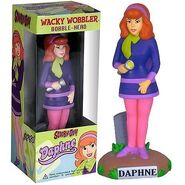