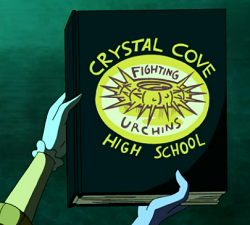 An old copy was found by the gang in the backpack of Alice May after she was arrested. It contained pictures of the original Mystery Incorporated and got the gang thinking more about the mystery of the missing kids. Alice May followed the instructions of Mr. E's henchman to search the basement of Crystal Cove High School and find the hidden yearbook, and then plant it in her backpack for the gang to find. The entire Ghost Girl scheme was for this purpose.

They found a yearbook outside of Doogle McGuiness's house and has the girls Hebediah Grim attacked circled. When they questioned him, he denies it to be his, but recognized it having signed it. Before he could answer Hebediah Grim knocks him away.

They later figured out that the yearbook really belongs to Ethan who used it to put the blame on Doogles. (Grim Judgment

Retrieved from "https://scoobydoo.fandom.com/wiki/Crystal_Cove_High_School_yearbook?oldid=318514"
Community content is available under CC-BY-SA unless otherwise noted.