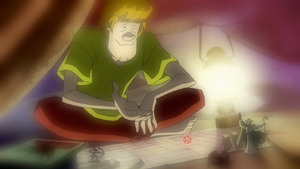 Crypts and Creatures is a role-playing game with a reputation for only being played by nerds.

The Crypts and Creatures player Horbert Feist wanted to get revenge on all his playing partners for ruining and outgrowing the game, so he became the Dreamweaver.

Retrieved from "https://scoobydoo.fandom.com/wiki/Crypts_and_Creatures?oldid=302013"
Community content is available under CC-BY-SA unless otherwise noted.