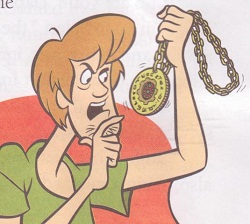 The Crostini Medallion is a valuable and supposedly cursed piece of jewelry from Transylvania.

It is round with a circle of small green stones in the center, and it is inscribed with the words, "Serip mav emoc lew" which is "Welcome vampires" backwards, with both words having each syllable seperated.

Retrieved from "https://scoobydoo.fandom.com/wiki/Crostini_Medallion?oldid=278249"
Community content is available under CC-BY-SA unless otherwise noted.