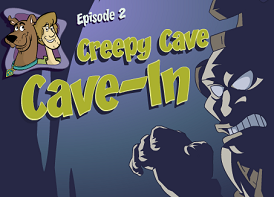 Scooby-Doo and Shaggy are chased into a cave by the Mayan Mayhem. They must find their way out to continue to the Temple of Lost Souls to find the hottest peppers in the world.

The Mayan Mayhem has found Shaggy and Scooby, so the two have to maneuver through a jungle to escape while also finding a way to get inside a cave. After maneuvering through a series of tunnels, the two eventually found someone working. It was archaeologist Katrina Badfellow. Despite the fact that she never heard the "El Habanero de Mucho Gusto" peppers, she did know that the only exit from the cave is a hole above.

After reaching the hole, Shaggy eventually found the lost city of the Tikal, which is where the Temple of Lost Souls was located. Unfortunately, it started raining, which eventually eroded the soil, causing the duo to slide down while on top of a rock.

Retrieved from "https://scoobydoo.fandom.com/wiki/Creepy_Cave_Cave-In?oldid=269381"
Community content is available under CC-BY-SA unless otherwise noted.