This article is about the Creeper from the Scooby-Doo, Where Are You! episode Jeepers, It's the Creeper​. For other incarnations, see Creeper (disambiguation).

Creeper (Scooby-Doo, Where Are You!)

To rob money from his bank

SDWAY: Jeepers, It's the Creeper

The Creeper was the disguise of Mr. Carswell, a bank president.

The Creeper was a costume resembling a green-skinned phantom/zombie with a hunchback posture, dark red hair, yellow eye sclera, and a somewhat lopsided face with prominent cheekbones and a long jawbone. He wore a dark green trenchcoat with matching dark green pants, a black inner shirt and black shoes.

He had a violent temper, as shown when he brutally beat up a bank guard. He also didn't appear to be very smart as he fell for Scooby-Doo's incredibly obvious hen disguise. He was obsessed with the paper that the bank guard gave Mystery Inc. (because it was the only evidence that Carswell was secretly robbing the bank).

He could supposedly walk through walls, allowing him to rob the bank. In fact, the trick worked because Carswell was the bank president and had complete access. He also had immense strength as he easily felled a solid tree trunk and pushed it into the road as a roadblock, knocked the bank guard out with ease and ransacked his entire car without damaging it on the outside. He was also shown as a skilled horse rider during a chase scene with the gang.

Mr. Carswell used the disguise to cover up his bank robberies. Since he was the last person to leave the bank every day, he would simply rob the safe, then leave the bank normally. Then he would come back as the Creeper and made it look like he was the one committing the robberies, explaining the lack of any evidence of a break-in as the Creeper being capable of walking through walls. Unknown to Carswell, a bank guard would eventually install a concealed security camera that would take a picture of Carswell robbing the bank.[1]

When Carswell discovered the camera and that it took photographic evidence of him, he went after the guard to destroy the film before it could be developed. He succeeded in destroying the negatives, but the guard managed to keep a piece of paper that was evidence intact. This paper was given to Mystery Inc on their way to the school dance. The gang later explained what they found and learned to Carswell and, after they left, figured out what the paper was. He then dressed up as the Creeper and chased the gang in order to get the paper, but failed and was later captured, exposed, and arrested.[1]

When Mystery Inc. made it to level 10, the last level of the Scooby-Doo and the Cyber Chase video game, the Creeper was one of the classic monsters, along with the Jaguaro, Old Iron Face, Gator Ghoul and the Tar Monster. As with the other monsters, it chased after one of the Mystery Gang members and their virtual counterparts. In its case, it hunted the two Daphnes, It was defeated when Scooby-Doo reached the box of Scooby Snacks, which brought an end to the level, or in this case, the entire game.[2]

Scooby-Doo and Guess Who? 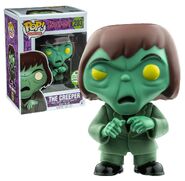 Retrieved from "https://scoobydoo.fandom.com/wiki/Creeper_(Scooby-Doo,_Where_Are_You!)?oldid=418794"
Community content is available under CC-BY-SA unless otherwise noted.