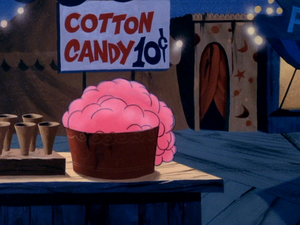 Cotton candy is a form of spun sugar. It commonly appears in pink, and can be typically found at amusement parks.

The second time Mystery Inc. investigated Funland, it was completely out of control, including the cotton candy machine, making a seemingly endless supply.[1]

Fred Jones held some cotton candy when he and the girls had visited Shaggy Rogers at the zoo he was volunteering at.[2]

Agent 2 managed to get some cotton candy from Shaggy and Scooby World, but unfortunately it ended up getting trampled on.[3]

Scooby-Doo and Guess Who?

A boy ate cotton candy at the volleyball tournament.[4]

Shaggy Rogers & Scooby-Doo had to go back to search for clues at Creepy Spooky Terror Land by themselves, which made it easier knowing that there was nachos, only Daphne Blake ordered them not to eat any, so they went to the cotton candy instead.[5]

Insert details here. (Into the Mouth of Madcap)

Retrieved from "https://scoobydoo.fandom.com/wiki/Cotton_candy?oldid=364407"
Community content is available under CC-BY-SA unless otherwise noted.