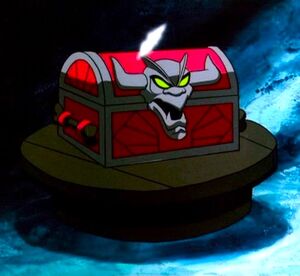 The Chest of Demons is a magical chest which holds the thirteen most terrifying spirits of the world.

Although the chest was meant to hold thirteen ghosts, only twelve were caught.

It all started when Vincent and Mortimer found King Solomon's Chest of Demons at his temple until Vincent accidentally release all the 13 ghosts. (Scooby-Doo! and the Curse of the 13th Ghost)

The 13 Ghosts of Scooby-Doo

In ancient times, thirteen spirits terrorized the world and were somehow trapped within the chest by unknown means. The chest was locked away in a crypt of a temple located in a remote village in the Himalaya's where it remained for many years and was later found by the two ghosts Weerd & Bogel who were unable to open the chest (as it could only be opened by the living) but were able to trick Scooby-Doo and Shaggy Rogers into opening it.

The chest was taken by the group and was used to re-imprison the spirits that were released, during their adventures, the former captive spirits tried whatever they could to destroy the chest, hinting that it may be a seal of an incredible power. Although the ghosts are eventually returned to the chest, its fate is unknown although it can be assumed that it was hidden by the group or returned to its original location in the dark crypt.

Scooby-Doo! and the Curse of the 13th Ghost

Retrieved from "https://scoobydoo.fandom.com/wiki/Chest_of_Demons?oldid=358768"
Community content is available under CC-BY-SA unless otherwise noted.