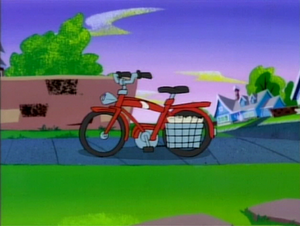 The Cherry 59 Starfire Special was the bicycle Shaggy Rogers rode as a pre-teen.

Shaggy was unable to deliver newspapers without his bike because it had been stolen by his boss from the Daily Babbler, who needed the bike chain to work his money counterfeiting machine in the basement of the Ferguson Estate. The gang soon uncovered his scam, and Shaggy got his bike back.[1]

Retrieved from "https://scoobydoo.fandom.com/wiki/Cherry_59_Starfire_Special?oldid=313913"
Community content is available under CC-BY-SA unless otherwise noted.