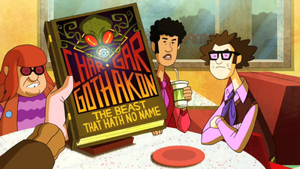 The book became the center of a controversy at Darrow University after the book's monster, Char Gar Gothakon, came to life and began anyone who was critical of H.P. Hatecraft, including Hatecraft's rival, Harlan Ellison. Though fans took the work seriously, encouraged by Hatecraft's theatrics and claims that the book came from actual ancient texts, he admitted that it was simple a work of fiction when it was clear that people were being placed in danger because of the book.

Char Gar Gothakon turned on Hatecraft and attacked him in his home. Mystery Incorporated were able to save Hatecraft and trap the monster, revealing that Darrow University student and Hatecraft super-fan Howard E. Roberts was responsible. Roberts took the book so seriously that he brought the monster to life to attack Hatecraft's critics, ultimately going after Hatecraft upon his admission that the work was fiction.

Retrieved from "https://scoobydoo.fandom.com/wiki/Char_Gar_Gothakon:_The_Beast_That_Hath_No_Name?oldid=363241"
Community content is available under CC-BY-SA unless otherwise noted.