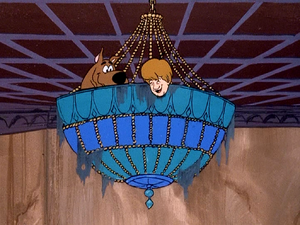 A chandelier is a decorative ceiling-mounted light fixture.

In a random act of courage, Scooby-Doo backed the Wolfman underneath a medieval chandelier (by pretended to be a highly unconvincing werewolf, himself, with piano keys in his mouth), where Shaggy Rogers let it fall on top of him.[1]

Scooby-Doo and Shaggy hid from the green ghosts in a chandelier. Possibly because of their laughing from thinking they had the ghosts fooled, one of them knew where they were and cut the chandelier down, from a secret removal panel in the ceiling, sending them crashing down through the floor, and into the wine cellar.[2]

Scooby Doo... Where Are You! (Gold Key Comics)

The secret uranium mining shook the entire 3 Stooges Ghost Town, forcing the Golden Dollar's chandelier loose and almost crushing the Three Stooges, if not for Moe holding a large plate above them all, while they were on top of one another.[3]

Insert details here. (I Left My Neck in San Francisco)

Insert details here. (The Ghoul, the Bat and the Ugly)

Insert details here. (Lock the Door, It's a Minotaur!)

Scooby-Doo! and the Gourmet Ghost

While looking around Vincent Van Ghoul's mansion, he was creeped out by the medieval style chandelier hanging from the ceiling of the first floor.[4]

Chandelier at the Golden Dollar.
Add a photo to this gallery

Retrieved from "https://scoobydoo.fandom.com/wiki/Chandelier?oldid=365043"
Community content is available under CC-BY-SA unless otherwise noted.