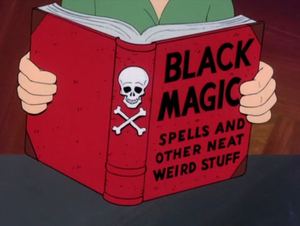 Black Magic: Spells and Other Neat Weird Stuff is a book of black magic owned by the supposed sorcerer Ebenezer Crabbe. During the investigation, Velma Dinkley found a newspaper article where it said that Ebenezer's neighbors suspected him of practicing witchcraft. Given that this is a real book of black magic, it is entirely possible he was a real sorcerer.

Retrieved from "https://scoobydoo.fandom.com/wiki/Black_Magic:_Spells_and_Other_Neat_Weird_Stuff?oldid=386376"
Community content is available under CC-BY-SA unless otherwise noted.