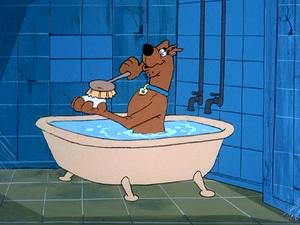 A bathtub, bath, or informally tub, is a large container for holding water in which a person (or dog) may bathe.

Bathtubs are containers that come in various sizes and shapes. Some are made of materials such as steel or wood. Some can also come with a shower.

Shaggy Rogers carried Scooby-Doo to a wooden bathtub for his bath, only for the pup to do the old switch-er-roo on Shaggy, dropping him in instead. Shaggy decided to wait till tomorrow for Scooby to get his bath. After the rouge dogcatcher Buster McMuttMauler was slingshoted away, Shaggy brought the tub out, which Scooby landed in after jumping out of Buster's way.[1]

Staying the night at Col. Beauregard Sanders's mansion, Scooby-Doo took a bath, only to discover the bathroom had been rigged, with the wall behind him opening, and the bathtub being thrust down a ramp, leading straight into the coal-filled basement, where he received the frightening surprise of the Phantom Shadow. When Scooby lead Fred Jones and Shaggy to the bathroom, they found that the tub's still there, and bolted to the floor.[2]

Insert details here. (A Tiki Scare is No Fair)

Shaggy, Scooby and Scrappy landed in a bathtub and shower after falling down a manhole in Paris. They used it as a boat while trying to find a way out of the sewers. The tub got full of water after Scooby accidentally turned on the shower. Scrappy pulled the plug to drain the water, only for the entire tub to sink.[3]

The New Scooby and Scrappy-Doo Show

Dada-Doo was taking a bath when Shaggy and his oldest son accidentally dropped in trying to get away from the Ghost of McBaggy Rogers.[4]

Retrieved from "https://scoobydoo.fandom.com/wiki/Bathtub?oldid=349956"
Community content is available under CC-BY-SA unless otherwise noted.