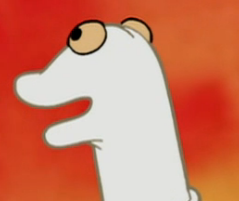 "Andy" is Agent 2's name for his sock puppet, which he started using when he stood in for Dr. Phineus Phibes' psychiatrist.[1]

Phibes found it so annoying in the end that he stuck Agent 2's hand into the ocean to "drown" the puppet.[1]

Agent 2 brought Andy out again when he was under the influence of stupidity gas.[2]

Retrieved from "https://scoobydoo.fandom.com/wiki/Andy_(Agent_2%27s_sock_puppet)?oldid=365539"
Community content is available under CC-BY-SA unless otherwise noted.