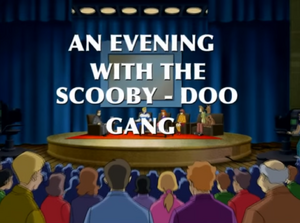 The Mystery Inc. gang is being interviewed in front of a live audience by a mysterious host...

Retrieved from "https://scoobydoo.fandom.com/wiki/An_Evening_with_the_Scooby-Doo_Gang?oldid=365203"
Community content is available under CC-BY-SA unless otherwise noted.