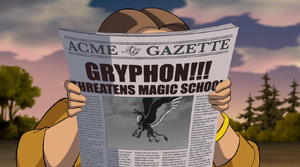 The Acme Gazette is a newspaper.

The Acme Gazette published a photo of the Gryphon took by a Whirlen Merlin's Academy of Magic student during a special dinner for Mystery Inc. An angry mother read about this which led her to removing her son from the school.[1]

It reported on Babyface Boretti's escape from prison.[2]

A rave review was given on the night the gang first performed for the Brancusi Circus, where they thought the appearance of werewolves was a part of the show, and complimented Shaggy Rogers's "animal training" over "Scabby", adding that he was the greatest circus artist since Felix Adler. This led to Shaggy being able to eat for free at Cap'n Fatty's Rib Ranch.[3]

As Mystery Inc. hit the road after solving the Phantom case at the Talent Star competition in Chicago, Velma Dinkley read on sightings of a monster at Goose Lake (breaking the awkward romantic tension between Daphne Blake and Fred Jones).[4]

Retrieved from "https://scoobydoo.fandom.com/wiki/Acme_Gazette?oldid=299969"
Community content is available under CC-BY-SA unless otherwise noted.