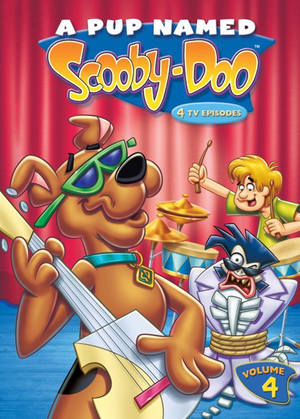 THEY MIGHT BE LITTLE BUT THE FUN AND ADVENTURES ARE HUGE!

Follow the delightful mystery-solving antics of a frisky pint-sized Scooby-Doo and friends Shaggy, Daphne, Velma and Fred as youngsters. Join them as they take on 4 more terrific cases!

A stinky mall monster adds new meaning to the term "shop till you drop" in Lights...Camera...Monster! For his birthday, Scooby-Doo inherits a valuble family dog collar and the ghost of a mad dog catcher wants to net in Curse of the Collar. A one-eyed sludge creature tries to commandeer the coolest toys from the Colossal Toy factory...until conforted by The Return of Commander Cool (a.k.a. Shaggy). Rock-'n'-roll is alive and well when heartthrob Buddy Chillner hits the town. But before Buddy can rock out, the school of rock turns into the ghoul of rock in The Spirit of Rock 'n' Roll!

Retrieved from "https://scoobydoo.fandom.com/wiki/A_Pup_Named_Scooby-Doo:_Volume_4?oldid=174897"
Community content is available under CC-BY-SA unless otherwise noted.