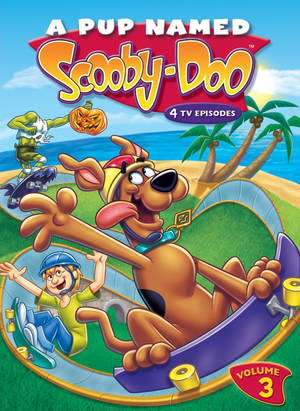 Follow the delightful mystery-solving antics of a frisky pint-sized Scooby-Doo and friends Shaggy, Daphne, Velma and Fred as youngsters. Join them on 4 more frightfully fun adventures!

Hey Scooby Dude, can you catch the Headless Skateboarder who's stealing the dolphins from Velma's aunt? Then after a fun night of trick-or-treating, the gang discovers a good ghost gone wild in Ghost Who's Coming to Dinner? In The Story Stick, Scooby-Doo and pals run into an angry totem pole spirit and try to chop it down to size! After so much outdoor fun, it's time to retreat to Daphne's bedroom - only all her furniture has been stolen! The family puts Robopup on the case... until Scooby-Doo teaches it a few puppy tricks of his own!

Retrieved from "https://scoobydoo.fandom.com/wiki/A_Pup_Named_Scooby-Doo:_Volume_3?oldid=227458"
Community content is available under CC-BY-SA unless otherwise noted.