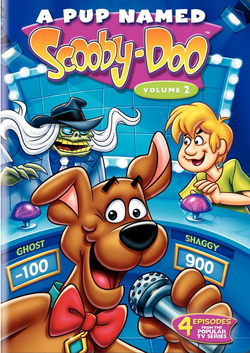 Shaggy and Scooby hope to win to win the big prize at the gang's favorite TV show. But if they can't solve the mystery of a "free-floating spectral apparition," it'll be lights out on the set of For Letter or Worse. In Babysitter from Beyond, Shaggy and Scooby confront the hair-raising bride of Boogedy Bones. At Snowy Mountain Lodge, our heroes meet an ornery Ice Demon in Snow Place like Home. The Coolsonian Museum is a place where kids can touch anything they want - except the cursed sword of a 700-year-old samurai warrior. Time for the gang to sharpen their crime solving skills in Now Museum, Now You Don't.

Retrieved from "https://scoobydoo.fandom.com/wiki/A_Pup_Named_Scooby-Doo:_Volume_2?oldid=269076"
Community content is available under CC-BY-SA unless otherwise noted.