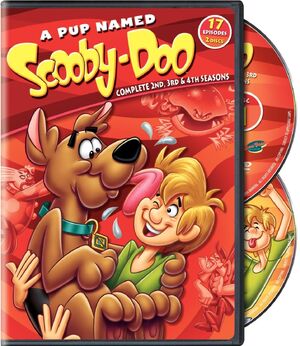 A Pup Named Scooby-Doo Complete 2nd, 3rd & 4th Seasons is a 2-DVD set containing the second and third seasons of A Pup Named Scooby-Doo released March 17, 2009 by Warner Home Video. The set contains the remaining fourteen episodes of the series on two disc. The first disc contains all eight episodes from season two while the second disc contains all episodes from seasons three and four.

ARE YOU BRAVE ENOUGH TO JOIN SCOOBY-DOO'S TEAM?

What could be better than having your own puppy named Scooby-Doo? How about 3 Entire Seasons full of 17 Great Episodes! This 2-Disc Collection has everything you love about younger Scooby-Doo and his grade-school pals Velma, Freddy, Daphne and Shaggy...from cursed collars to haunted hairpieces and alarming amusement parks. In addition to roller coasters, you'll take the ride of your life aboard a spooky space shuttle and buddy up with a bad boogey biker. Catch monsters aplenty, like the dreaded Chickenstein, the clownish Zombo and the Doo Family Were-Doo. Renew your membership to the Scooby-Doo Detective Agency now and you'll also receive some delicious extra-program Scooby snacks!

Back cover.
Add a photo to this gallery
Retrieved from "https://scoobydoo.fandom.com/wiki/A_Pup_Named_Scooby-Doo:_Complete_2nd,_3rd_%26_4th_Seasons?oldid=365469"
Community content is available under CC-BY-SA unless otherwise noted.