View source
watch 01:40
The Sandman Will Keep You Awake - The Loop
Do you like this video?
Play Sound 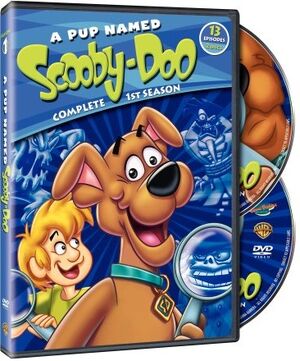 ARE YOU BRAVE ENOUGH TO JOIN SCOOBY-DOO'S TEAM?

Congratulations on finding your most valuable clue to solving how Mystery Inc. got started - with the Scooby-Doo Detective Agency! Scooby-Doo was even more adorable as a pup, as were little Shaggy and the other crime-solving youngsters. Stick your sleuthing nose into Season One's 2-Disc Set of adventures full of childhood chills and chuckles, including FOR LETTER OR WORSE, where a famous gangster ghost haunts a TV game show, or at Daphne's house, where security dog ROBOPUP presses Scooby-Doo's buttons, or on the movie set of Stinkweed, where director Freddy shouts LIGHTS...CAMERA...MONSTERS! Now you can direct All 13 Episodes and Fun Special Features anytime you want!